USING YARDSTICK ONE TO CONTROL A REMOTE CONTROLLED POWER PLUG

I had a remote controlled power plug (Figure 1) purchased from Home Depot (or Amazon, cannot remember anymore) whose remote was malfunctioning. The On button would work but the Off button did not. I saw this Hak5 video on the Yardstick One and realized I could try doing the same with the YardStick One I had purchased a few years ago, but never used. If you love watching videos instead of reading blogs, the Hak5 video linked earlier is good enough. However, if you prefer reading a blog instead, this post is for you.

Since this post could be relatively long, the Table of Contents below can allow the reader to skip to the appropriate section of interest.

This post requires you to run this on any supported Linux distribution. I used the latest Kali Linux for testing this out, along with the Elonics 4000 RTL-SDR dongle and the Yardstick One. 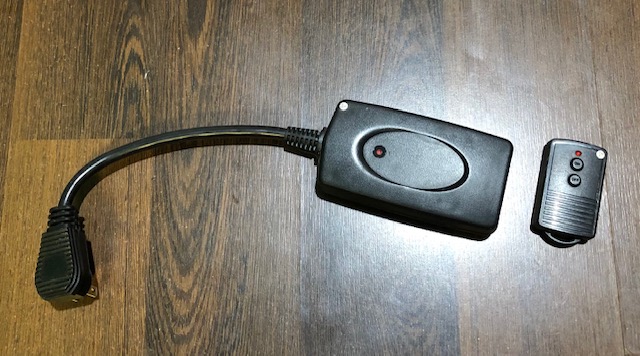 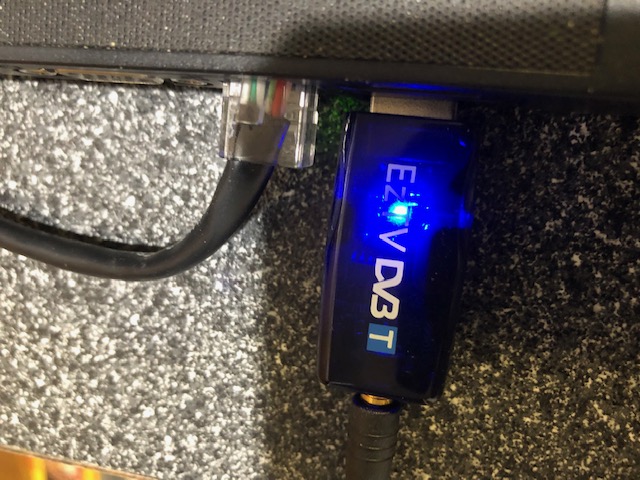 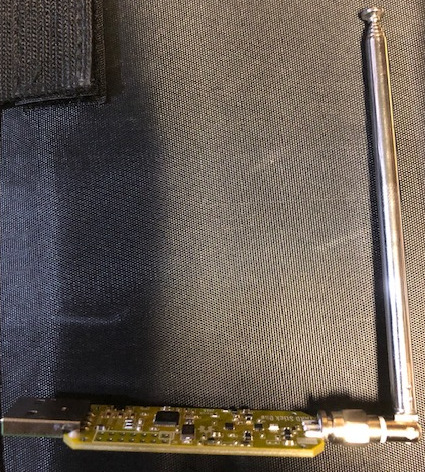 Figure 3. Yardstick One with Antenna

On the Linux system, you need to run the following command to install the required software to accomplish this procedure.

I also setup udev rules for rfcat to be able to run without root using the 20-rfcat.rules file, and rebooted the system before use. The user has to be added to the dialout group to take advantage of the udev rules.

NOTE: If you do not want to do this you will need to run rfcat under sudo.

Step 1: Find the radio frequency receive/transmit details of the remote controlled power plug. For that you look at the FCC ID printed on the transmitter, which in our case is the remote (Figure 4) and it is PAGTR-009-1B. 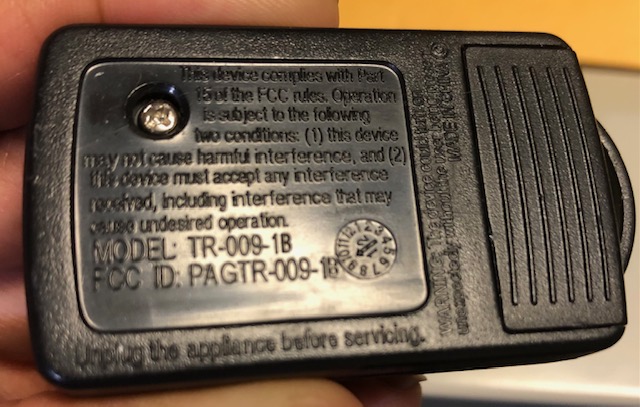 Step 2: Go to fcc.io and type in the FCC ID and hit Search which will take you to this page as seen in Figure 5.

Step 3: In the above image you can see that the remote transmits on the 315MHz band. Click on the link that says Detail in the search results. It will bring you to the list of documents filed by the manufacturer of the remote controlled power plug, as seen in Figure 6.

Step 4: Click on the document titled test report and open the PDF. Scroll to the section 2 and you can see the details of the exact frequency at which the remote transmits, which is 314.902 MHz, as pointed by the red arrow in Figure 7. The remote also uses ASK or Amplitude Shift Keying to send data over the radio waves. Since the purpose of the remote is to just send on and off digital signals, we can also assume it uses the OOK or On-Off Keying form of ASK.

Sniffing is accomplished using the RTL-SDR dongle and the gqrx program.

Step 1: Make sure it is plugged into your USB port first and that Linux can detect it. You should be able to see it listed, if you run the lsusb command, as seen below. The line that says RTL2838 denotes that the dongle has been successfully detected.

Step 2: Start the program gqrx by either using the search bar in the menu on the Kali Linux desktop, or by typing the command gqrx in the terminal. This is not a tutorial on gqrx, so I will assume you already know how to use it.

Step 3: Verify that the gqrx is able to see the RTL-SDR dongle in its settings as shown in Figure 8. 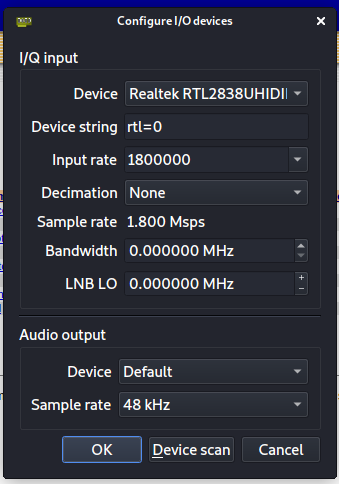 Step 3: Set the frequency to 314.902MHz in the gqrx UI and hit the ► (or play) button to start listening at that frequency. Note to record and save the radio waves in an audio .wav file format you must hit the Rec button at the bottom of the screen in gqrx, as shown circled in red in Figure 9. 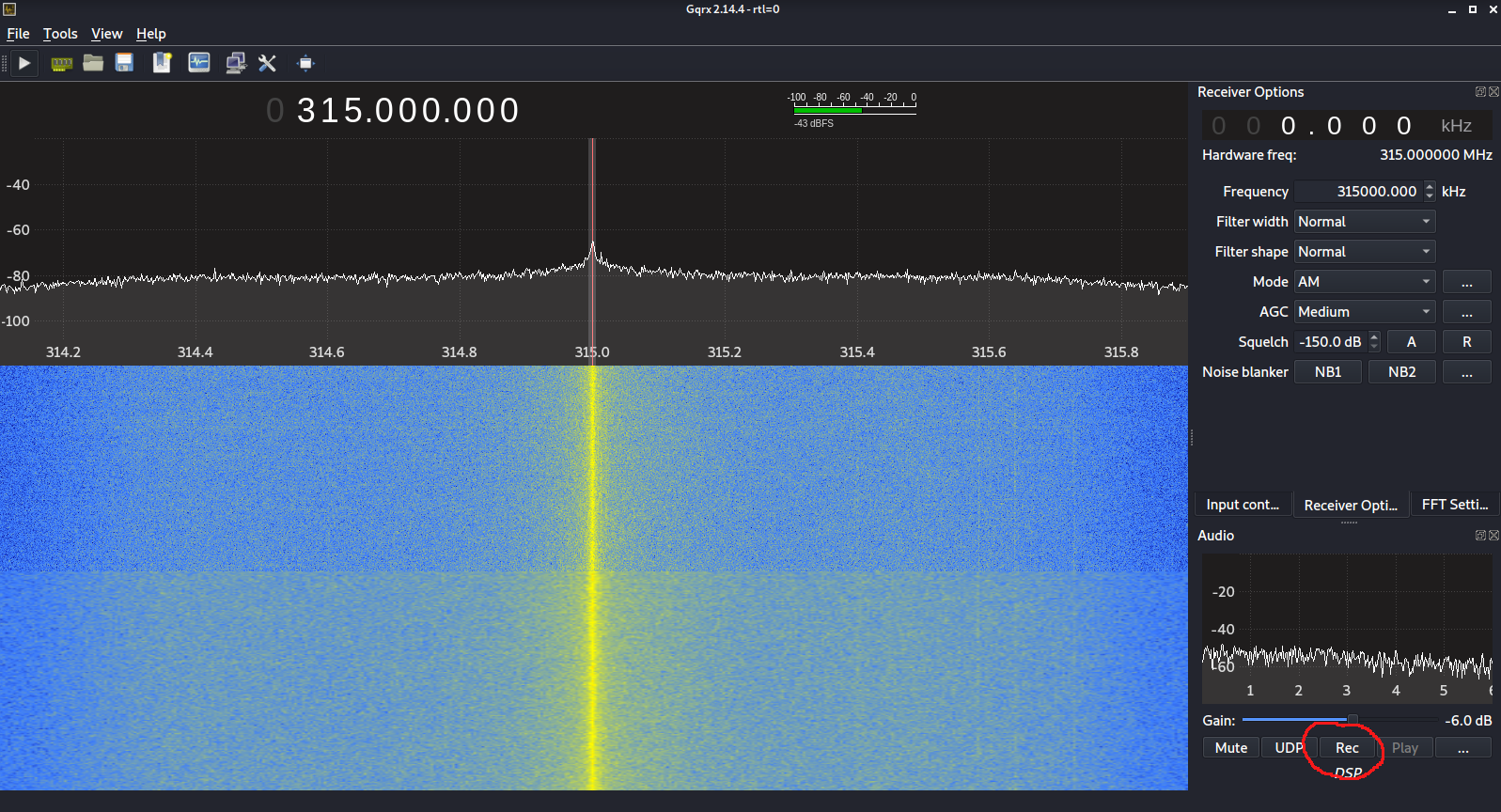 Figure 9. Set the frequency in gqrx

Step 4: Hit the ► button and the Rec button to start recording to a .wav file automatically.

Step 5: Now press the remote control On key a few times, or hold it till you see a lot of waveforms on the screen. If your system has a speaker, you will also be able to hear it. 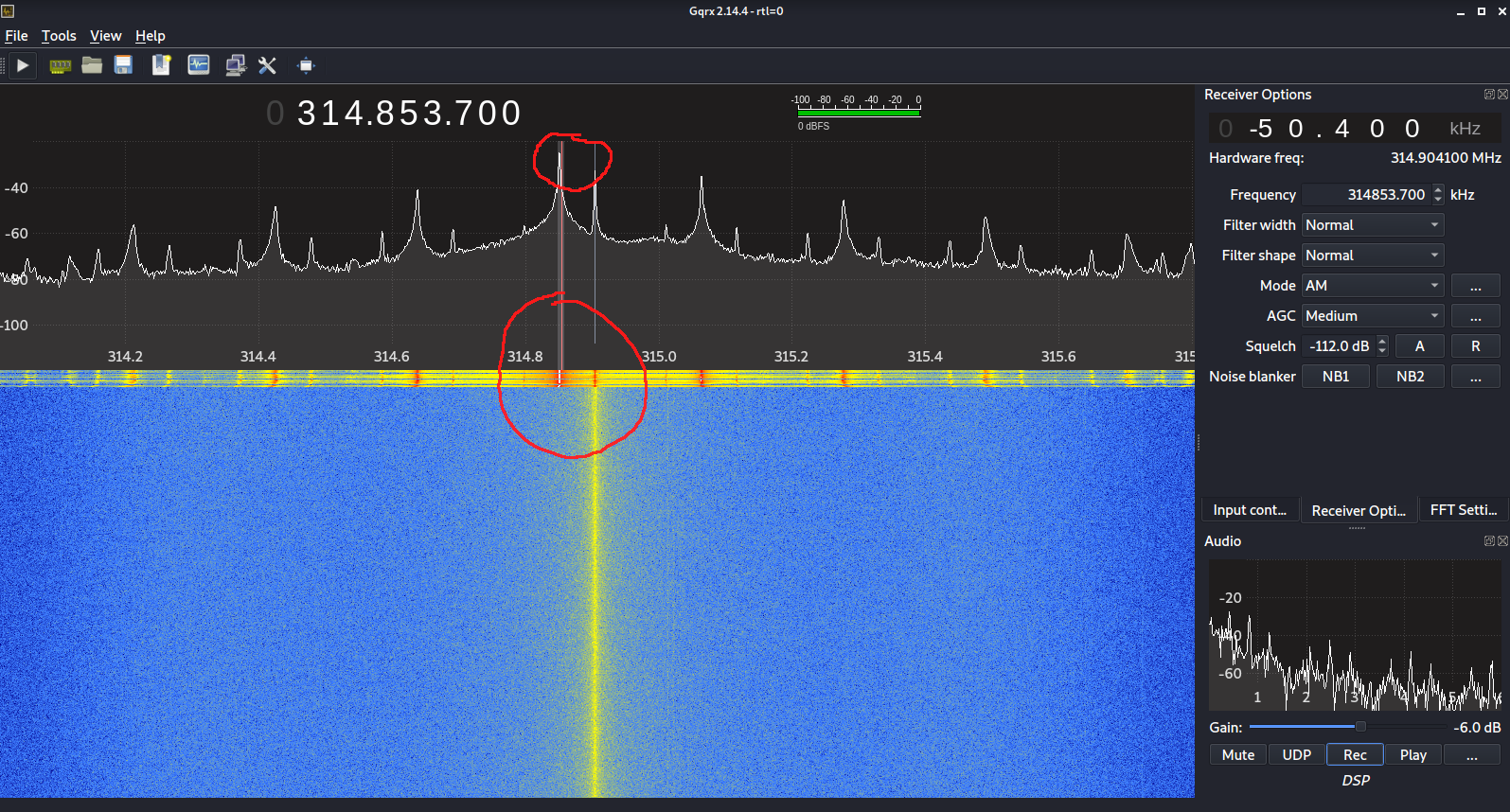 Figure 10. Waveform seen in yellow after pressing the On button continuously on the remote

Step 6: Now repeat the same procedure for the remote control’s Off key a few times and save the .wav file.

NOTE: In my case since the remote control was not functioning properly, I opened it up and then pressed the switches that were on the circuit board directly and it sworked (Figure 11). As you can see, the remote control has a pretty simple design. 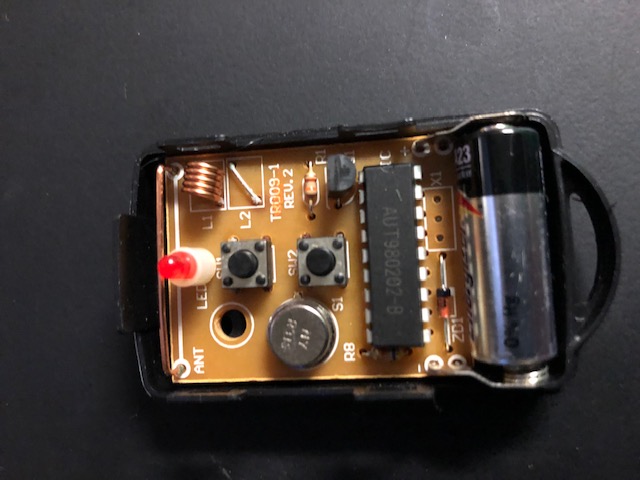 Step 7: Now that we have saved the wave files, let’s use audacity to view and decode them.

Step 1: Start audacity by typing audacity on the command line or using the menu search bar in the UI.

Step 2: Open one of the .wav files. In Figure 12 below, I am using the On button press waveform file. 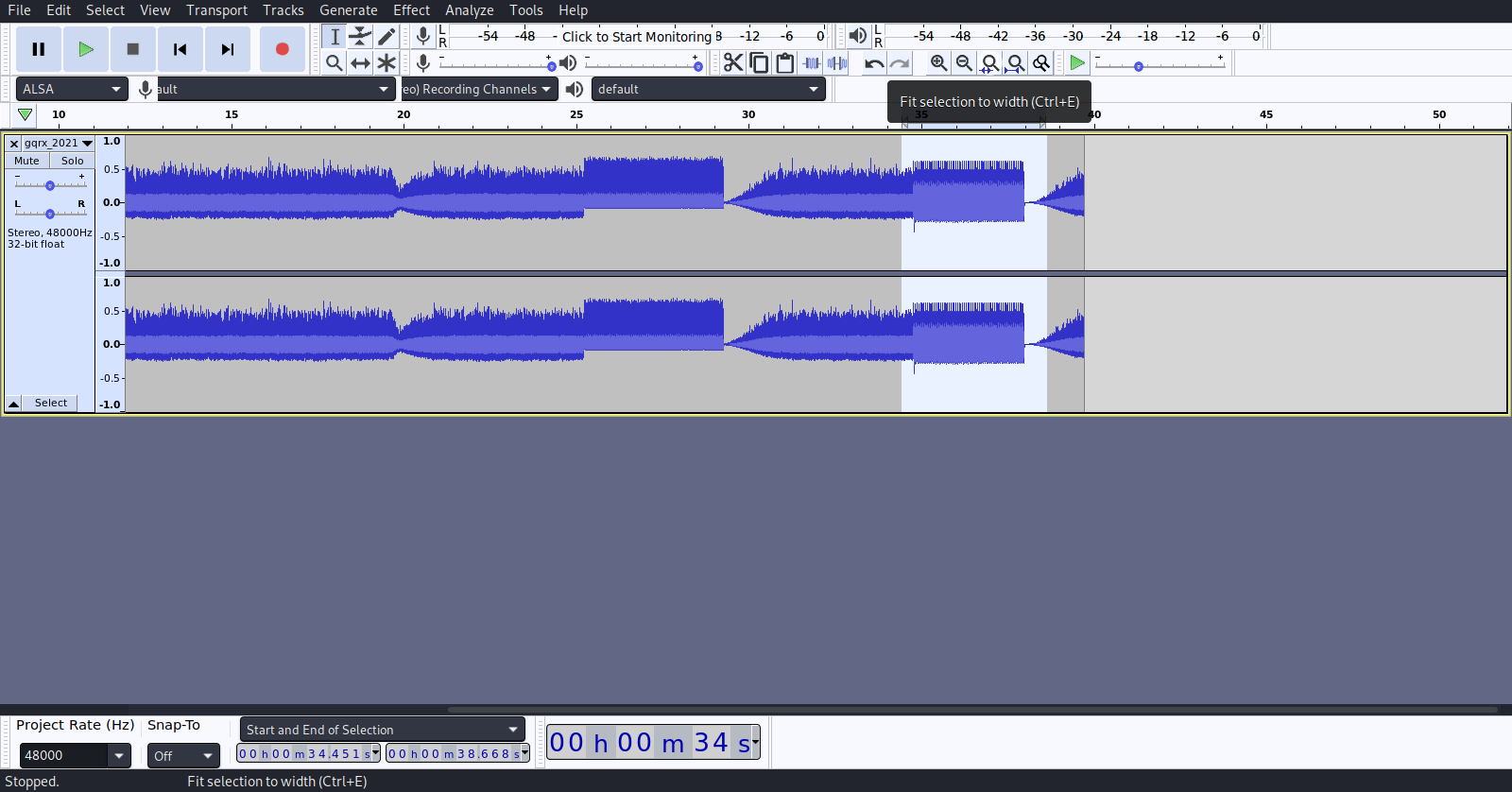 Step 3: Zoom in to locate the repetitive signal of the button press you are decoding. You can see the periodic signal in the waveform as seen in Figure 13.

Step 4: Further zoom in to see the actual bytes of the signal as seen in Figure 14. You can see the peaks and troughs in the signal representing the 0s and 1s in the signal byte-stream.

Figure 14. Further zoom in to see the actual signal

NOTE: Based on the waveform we can definitely say that the remote control is using OOK as guessed in the previous section.

Now that we have decoded the signals, let us try to transmit them with the Yardstick One.

Step 1: First plug in the Yardstick One into the computer’s USB port as shown in Figure 18. When you run lsusb it will show a string with OpenMoko in the description, and that is the Yardstick One.

Figure 18. Yardstick One with Antenna plugged into the computer

Step 2: Start rfcat as below. If you did not install the udev rules outlined in the Setup Software section, then run it under sudo.

For more details on the rfcat commadline API, read the Github code or this article by GiamMa-based SDR Researchers, which I found incredibly helpful to understand the API. This article describes each API function that we will be using in the next step, so I will not be reproducing the description here.

Step 3: Once inside the rfcat interpreter, run the following commands. The explanation of each command is in the comments. rfcat uses Python syntax, since technically it is an iPython interpreter.

Step 4: Every time you transmit the On or Off signals, you should see the power plug respond by its internal LED turning on or off. I connected a table fan to the power plug to see if it turned on or off when I gave the correct commands, and it did.

This project was a success and I was able to replicate the work done in the Hak5 video. Hope it helps you understand how to go about sniffing and decoding simple remote control signals that work on the 315MHz band, by using the Yardstick One. 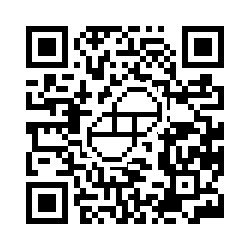 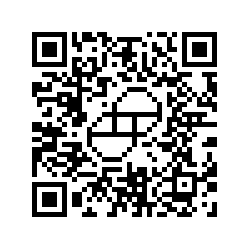